From the Gilroy Dispatch 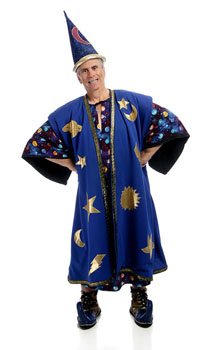 MORGAN HILL – Standing before a tough crowd Sunday, Magical Wizard Lee Curtis had his work cut out for him. A group of skeptical seven and eight year olds anxiously were awaiting his next trick, trying to figure out his secrets.

With each part of Curtis’ magic act, from making objects change places to card tricks to making his pet rabbit Crystal appear in a cage, he began to win over the kids at 8-year-old John Patrick’s birthday party. Well, all of them but one; no matter what trick Curtis attempted, he couldn’t get Matt to believe.

“Most of the time, kids say ‘I know how you did that.’ Many kids see it as a challenge,” said Curtis, who said kids are taught in school to question what they see. “It’s really fun when a kid comes up to me after the show and says I really am magic. It means I got over their suspicions.”

But by the time the show was finished, it didn’t matter whether Matt had any idea how any of the tricks worked. He was smiling.

“The bottom line is that he had a wonderful time and so did the other kids,” Curtis said.

Curtis, 48, focuses his show on children, especially at birthday parties. His act includes a lot of joking with the audience and pretending a magic trick doesn’t work or forgetting to say the magic words. Since it was John Patrick’s birthday, the magic words for each part of the act were, “Happy Birthday, John Patrick.”

“The birthday kid is the star of the show,” Curtis said. The birthday child is always called up during the show and, for the magician’s final act, is levitated on a seat.

Curtis, a Morgan Hill resident, is the only magician catering to children in the Bay area. He does shows as far north as San Francisco and south as Gilroy.

Curtis won the 2001 Reader’s Choice Award for Best Children’s Entertainer from Bay Area Parent Magazine, but the kids aren’t the only ones having fun during Curtis’ show. Parents also find themselves trying to figure out the magic and laughing at his jokes.

“It’s wonderful that the people I do this for appreciate what I do,” said Curtis, who charges $225 for his one-hour magic act.

Curtis first became involved in magic when he was a 10 year old living in Cupertino.

“A kid in school showed me a magic trick and I was hooked,” Curtis said. “By the time I was 14, I was doing shows at birthday parties.”

After college, Curtis had to cut down on doing the magic act and began working at Toys R Us and later in the vending machine business.

“I got out of college, and it got pretty tough,” he said. “I always thought I’d do it again.”

That opportunity came seven years ago, when Curtis decided he could take on the magic act full-time. Most of his shows are birthday parties for about 15 to 20 kids, but Curtis has done shows for as many as 1,000 kids or, in one special case, just one child.

“It was kind of sad,” Curtis remembers. “It was a child that was being returned to his family (because of a custody issue).”

With the variation in the size and age of his audience, Curtis’ has to be ready to change up his show at any time.

“I have to be real flexible,” said Curtis, who often mixes up which tricks he’ll perform mid-show to keep his audience entertained. “I want them lively, but I want them under control.”

Curtis said his favorite age to perform for are the younger audiences.

“Six year olds just believe,” he said. “They think I leave the house and go off on a magic carpet.”

Curtis said in the future he hopes to do more shows at elementary schools, but, for the most part, doesn’t want to change a thing. He is enjoying every minute of bringing magic into kids’ lives.

“Kids are fun to perform for, and I want to have fun doing this,” he said. “I’ve done adult shows, and I didn’t have as much fun. If you love what you’re doing, it comes across.”