Do you perform for children?

I specialize in children’s entertainment. One of the things that sets me apart from almost all other full time professionals, is that I am exclusively a children’s entertainer. Many other so called “children’s entertainer” are only doing it to fill in the gaps, between the higher paying adult gigs. More than 25 years ago, I did the same as everyone else, but then I began to discover that I loved the amazement and wonder that I see in the children when I perform, and I decided that I was going to dedicate myself to being the very best children’s entertainer I could be!

Do you perform for adults? 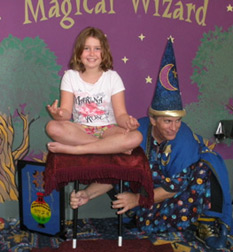 When someone asks me that question, it is usually after they have seen me perform somewhere. I always respond, with the question “is there going to be children at the show, and will I be able to have the kids come up front, for me to perform for?”. If the answer from them is “No”, I turn down the show. If the answer to my question is “yes”, than I tell the inquiring person, “Yes, I can do the show, but know that I will be performing to the children. The adults will enjoy the show, but I really don’t worry about them. I don’t try to keep them entertained with double innuendos, etc, I just provide a good entertaining show for the kids, that the grown-ups just happen to enjoy at the same time.”

In your shows, do you do more than just the magic?

Where do you usually perform?

I perform anywhere children and families are present. Birthdays, schools, preschools, school age daycares, scouts, fairs, libraries, picnics and even weddings where you want me to entertain the kids while adults are involved in other activities. That is just to name a few, there are of course other places children and families gather, that my shows offer a lot of entertaiment.

The quickest way to reach me is call my 800 phone number. I do have a local number, but since I have moved more than a few times in the last 20 years since getting an 800 number, the same number has followed me everywhere. Plus when I am not in my office, the 800 number follows me to my cell. You can also reach me by email, however I never book shows through email, I always require a phone call to do it. That way I am sure, a 7 year old is not booking me for his birthday party without Mom and Dad knowing. I never want that to happen, again!

How long does your act last? 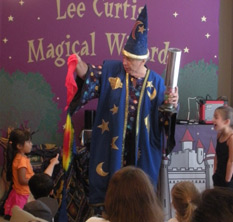 It varies, and I can customize it to meet your needs. My recommendations are:

Do you use animals in your show? 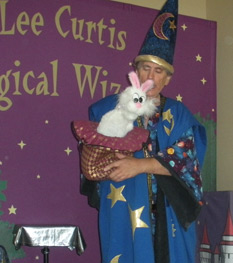 This is a very controversial subject, in the world of children’s entertainment. My answer is NO! I actually used to, I used to perform with rabbits and doves. But not any longer. It was a tough decision, and one that some of my associates get very hostile toward me when I share my stories, experiences and observations.

Like others, I took good care of my animals. Some of them were treated as household pets. I never “stuffed” my animals into tight secret compartments to produce or vanish, they were kept comfortable. They were loved, and some of them seemed to actually love the interaction with the kids at the shows, Crystal the Magic Bunny was the greatest, she performed with me for 8 years (a long time for small rabbits). She really did enjoy performing, she was actually quite the ham! Those are the positives.

Now for the negative side, that eventually changed my perspective:

So there you have it, my reasons for not having animals in my show, I know some parents still will want it, so I guess I am not the one they would want to hire.

I do love using puppets in some of my shows, the kids relate very well to them. The puppets end up doing magic themselves. Many times children ask me before or during the show, if I am going to make birds or a bunny appear. But I have NEVER had a child show disappointment after the show that I did not make animals appear, because it really was not necessary to entertain them.

What is the cost of your show?

It varies, please call me to discuss show prices, it can differ because of the driving time, length of show, and how much and how big of equipment I need to bring depending on the venue.

How do I hire you? 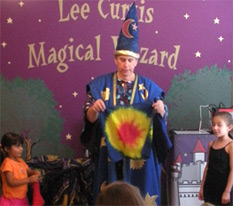 By phone only. I do not ever book shows through email. Two reasons, first; I want to know I am talking to a parent, and not a 10 year old booking me for his birthday party. More than once, Mom and Dad were so surprised and horrified when I showed up to do a magic show at a party. Jr. had seen me at another party, and wanted me for his party, but knew Mom and Dad would not go for the expense, so he booked me himself. Second reason; there are a number of different scams targeting entertainers thru email, even though I recognize the scam for what it is (first clue, they want me for a local show, but provide me with a foreign email address or even a foreign phone number, LOL) I won’t play. You can email me with your questions, but when it comes time to actually reserve and book me, it must be a phone call, 1-800-436-8749. After you make your reservation, I will mail you a confirmation letter.

How far in advance do you need to be booked? 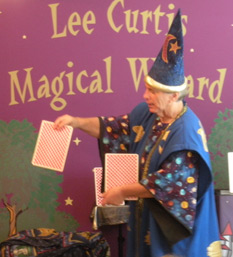 Sometimes, but not very often, I can be booked for a show the same day. However for Birthday packages I recommend that you call a month in advance, to have good chance at having your first choice for party time and date. School assemblies usually also a month in advance. Preschools and school-age childcare for shows during the summer, they would do well to make reservations several months in advance, as well as other school holidays like spring break.

How long have you been performing magic? 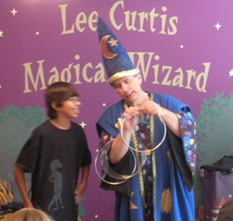 Oh-Oh! Let me preface that question with a statement “performing for kids, does keep me feeling young”. I started doing magic for friends and family when I was 10. I did my first birthday party magic show, for money when I was just shy of my 15th birthday. By the time I was 17½, while still in high school, I was living on my own supporting myself by doing magic shows. So you do the math, when people ask me how long have you been performing, I reply “I have been performing professionally for 40 years, soon to be 41 years, it’s not that I am really old, it is because I started when I was very young!”

In late 2009, life took an interesting turn, after living and working in Northern California all my life, we moved to beautiful and picturesque Colorado, so now the fun begins to build a new following and new business.

How would you best describe your act?

Comical. The character of the “Magical Wizard” is a bumbling, absent minded wizard, whose magic, often the wrong things happen, in a comical way, and then it is the magically empowered kids who make everything turn out okay.

Do you teach magic?

I do teach magic. I use to give private lessons, but have not done so in many years. I do however teach workshops for kids between the ages of 6 & 12. I offer the workshops for school age childcare centers, birthday parties and just about any other places children gather. In the workshops, the participants get all kinds of cool stuff. A magic wand (the same wand that is sold at party stores for $2), a booklet on how to do additional magic with things found around the house, and I teach them at least 6 other tricks and provide all the materials they will need to do the tricks. A few of the tricks I teach them include some commercially manufactures apparatus, that the kids think are really cool.

What form of payments do you accept?

For Birthday parties: I accept cash or Visa, M/C (credit or debit), Discover or Amex.  I can also accept Paypal. but it must be done 3 days in adavnce. For Birthday
Parties, I do NOT accept checks!

For Childcare Centers, Schools, and Company Parties:  I accept cash or Visa, M/C (credit or debit), Discover or Amex or Company Checks.

Do you require a deposit?

No. However if you are going to pay via Paypal, I require that we process that at least 72 hours in advance. Call me to make those payment arrangements 1-800-436-8749. Otherwise all payments are required at the show.

Do you require a contract?

No. However if you require one, I will happily do it, and have them ready. From my experience, almost always Schools and Companies want or require them. Birthdays and child care centers don’t need or require them. The reason I don’t always do them, simply, because they are a paper tracking nightmare, (I mail you 2 copies of contract, you sign both copies and mail both copies back to me, I sign both copies and mail back to you one copy) I don’t feel that childcare centers and birthday parents have the time to get all that done, Schools and Companies have employees, that is their job, plus they usually book far enough ahead, that there is time for all this paper shuffling to get done.